Next week, President Obama is threatening to veto a must-pass spending bill if Congress doesn't include funding for Planned Parenthood.

The problem is that pro-life legislators in Congress are being told it will be their fault if, as a result, the government shuts down.

Now, more than ever, we need our pro-life leaders to stand in solidarity with the unborn. While neither Congress nor the president have any basic constitutional obligation to Planned Parenthood, they do have a duty to the republic.

If Congress authorizes a budget that funds the government but not Planned Parenthood, no one can say it didn’t do its job. It is Congress, not the president, that wields the constitutional power of the purse. And it is the president, not Congress, who is responsible for executing budgets and therefore preventing a shutdown. 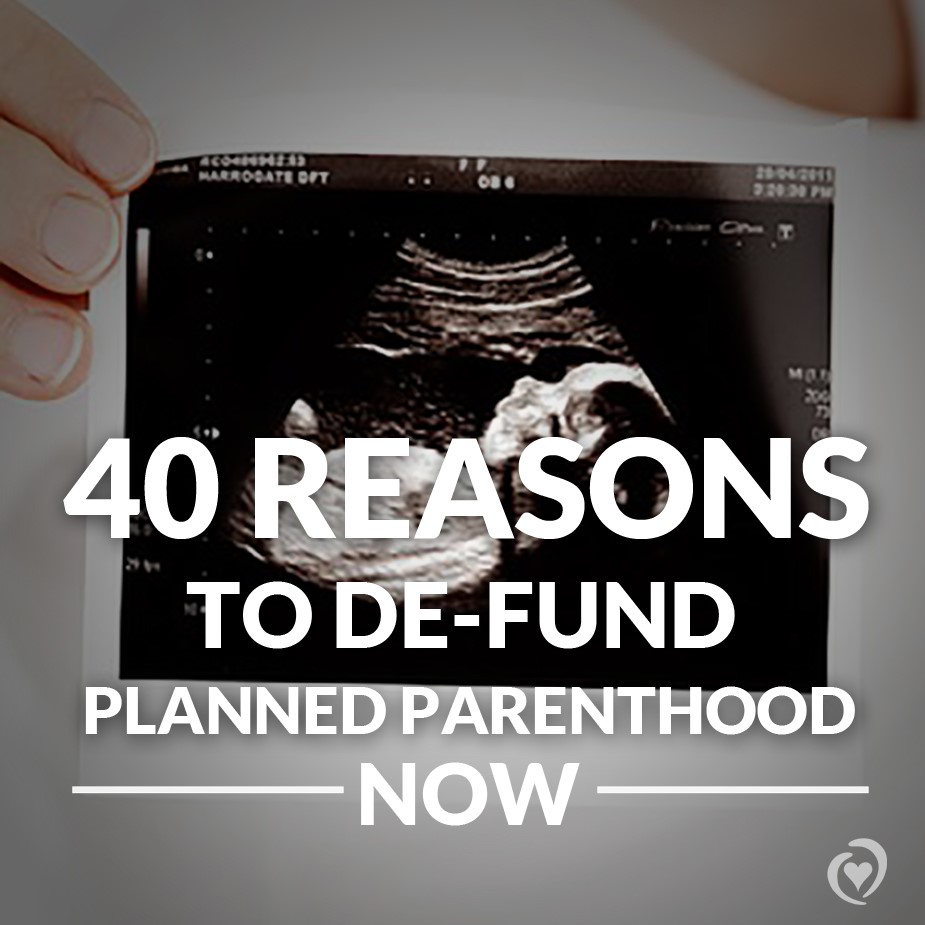 31. Abortion ends a human life. Unwittingly, Planned Parenthood is finally joining us in revealing the humanity of the unborn human child.

32. Video #1: Deb Nucatola, Senior Director of Medical Services, seen haggling over “calvarium,” “livers,” “hearts,” and “lungs” during a business lunch of wine and salad. She discusses altering the procedure, “crushing” the baby differently, to procure the organs.

34. These eight shocking moments from video #4, to include Planned Parenthood staff shouting, “It’s another boy!” while sifting through his parts. (Warning: Graphic content)

35. The horrors of video #5: “So, if we alter our process and we are able to obtain intact fetal cadavers, then we can make it part of the budget that any dissections are this, and splitting the specimens into different shipments is this. I mean that’s — it’s all just a matter of line items.” - Melissa Farrell, director of research for Planned Parenthood Gulf Coast in Houston; Planned Parenthood staff recalling, “It was a twin,” while reaching into the freezer to grab an 18 week old aborted baby; Planned Parenthood staff laughing, “We’ve had a really long day and they’re all mixed together in a bag.”

36. Holly O’Donnell’s testimony – An ex-procurement technician for StemExpress, Holly, a non-political, pro-life woman who unknowingly took a job to extract fetal parts, is featured in 3 of the videos, giving her eye-witness account of what went on at Planned Parenthood: Holly describing the abortion industry business model: “Pregnancy tests are potential pregnancies, therefore potential specimens. So it’s just taking advantage of the opportunities;” "She gave me the scissors and told me that I had to cut down the middle of the face."

37. Allegations of taking tissue without consent - Holly: “If there was a higher gestation, and the technicians needed it, there were times when they would just take what they wanted. And these mothers don’t know. And there’s no way they would know.”

40. StemExpress CEO describing demand for babies’ organs – From CMP’s release: “What would make your lab happy?” asks one of the actors. “Another 50 livers a week,” says Dyer. “We’re working with almost like triple digit number clinics,” Dyer explains, “and we still need more.” She later notes, “Planned Parenthood has volume, because they are a volume institution.”

If we don’t take a stand against Planned Parenthood's atrocities, who will? What will our history books have to say about the 114th Congress if every effort to oppose and de-fund Planned Parenthood were not exhausted in response to these egregious affronts to human life?