Yesterday, the Columbus Dispatch ran an eye-opening front-page story that could have broader political ramifications for the right to life here in Ohio.  The story is a personal one that focuses on a little girl's fight for life in the NICU at Nationwide Children's Hospital in Columbus. 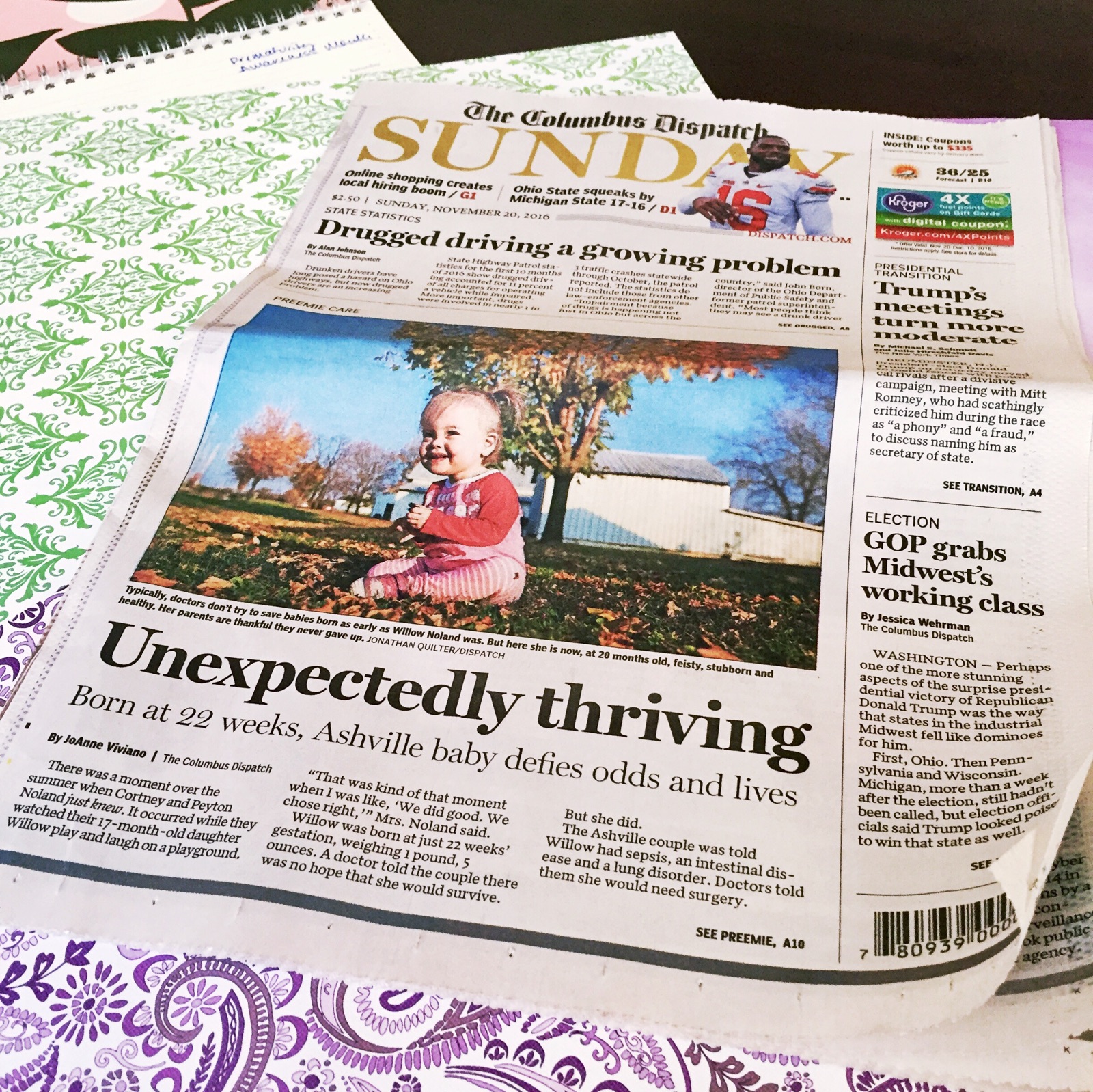 Born at 22 weeks gestation and weighing 1 lb and 5 ounces, little Willow was not expected to survive. But despite the odds, Willow lived.

The political significance of this story is in how it undermines an important standard that has determined the rights of pre-born children for the last 44 years.

When Roe v. Wade was decided in 1973, the Supreme Court ripped away all protections for the pre-born, allowing states to only limit abortions after 24 weeks. Since that time, this standard—the “viability standard”—has proven increasingly unworkable. Little Willow is showing us why.

>>>SIGN our petition to protect these babies from the pain of abortion now!

With advanced medical technology and improved standards of care, premature babies are bending and breaking the rules of "viability."

The front page of the Columbus Dispatch shows us why Ohio needs the Pain-Capable Unborn Child Protection Act NOW. This legislation would ban abortions when babies can feel pain, or at 20 weeks gestation.

This story gives a face to the hundreds of children in Ohio who remain unprotected by our laws, and it burdens us with the responsibility to act.

Now, with the legislative calendar year coming to a close, we have a limited window of opportunity to make this bill law.

>>>Will you sign our petition to pass the Pain-Capable Unborn Child Protection Act NOW and let your legislators know how important this bill is?

Read the story below and join us in responding with compassion and empathy to protect the lives of these vulnerable little children.

There was a moment over the summer when Cortney and Peyton Noland just knew. It occurred while they watched their 17-month-old daughter Willow play and laugh on a playground.

"That was kind of that moment when I was like, 'We did good. We chose right,'" Mrs. Noland said.

Willow was born at just 22 weeks' gestation, weighing 1 pound, 5 ounces. A doctor told the couple there was no hope that she would survive.

The Ashville couple was told Willow had sepsis, an intestinal disease and a lung disorder. Doctors told them she would need surgery.

She underwent four in total as she spent 236 days in neonatal intensive care.

And Willow survived. And thrived.

"She really is a miracle," Mrs. Noland said.

As a rule, physicians don't try to save babies born as early as Willow. It's rare that they live for long, and if they do, there are significant problems, including deafness, blindess, cerebral palsy and developmental delays.

Parents often have to fight for resuscitation.

"When I was a resident back in 1999, people said nobody under 24 weeks can ever survive, and now 23-weekers are surviving routinely," Shepherd said. "Now, people are saying under 23 weeks really can't survive, and there’s Willow, who was 22 weeks."

Families who choose to resuscitate these tiny babies face a long and arduous hospitalization, Shepherd said. Most can't go home for months. The cost can run into the hundreds of thousands of dollars.

Willow is Cortney's second child, and her husband's first. The pregnancy and ultrasound that revealed she was a girl were "just all highs," Mr. Noland said.

Then came March 4, 2015. It was four months before Willow's July due date. She came during a snowstorm.

At Mount Carmel East, Mrs. Noland suffered a serious complication in which the placenta separates from the uterine wall. She was told that she and her fetus had serious infections. She overheard the medical team say they thought both were going to die.

For about two hours, the couple grieved. Then Mrs. Noland's obstetrician arrived and requested a team to be on hand to resuscitate the baby and transport her to Nationwide.

Willow was delivered by Caesarean section. Then, the medical team had to fit "the smallest tube in the world" into the infant's airway and attach it to a breathing machine, Mrs. Noland said.

Willow was then whisked away to Nationwide. She couldn't be touched. Her skin, Mrs. Noland said, was like jelly, her head bruised black and blue, and her eyes sealed shut. She resembled a baby bird.

At a week old, she weighed 1 pound and underwent her first surgery, to treat a perforated bowel. Later, a second surgery treated a bowel obstruction.

Then, doctors diagnosed bronchopulmonary dysplasia, which kills half of babies like Willow and causes long-term brain development deficits in those who live, Shepherd said.

Willow was treated in a Nationwide center created just for bronchopulmonary dysplasia patients. It evolved from changes doctors began making to the care of such preemies more than a decade ago. It serves about 100 inpatient and 150 outpatient babies a year.

The goal, Shepherd said, is to do whatever is possible to encourage brain development in babies struggling to survive on ventilators.

Babies in this center get fewer lab tests and needle pricks. The medical team tries not to wake them. Noise and light levels are controlled. There is physical and music therapy, when babies are awake. And parents are encouraged to partake in "kangaroo care," holding the baby skin on skin for hours at a time.

The Nolands often did this for 12 hours a day, each taking shifts lying in a bed with Willow with a medical team removing her from her incubator. Mrs. Noland stopped working as a makeup artist so she could spend her days with Willow, who did better when mom and dad were around.

Mr. and Mrs. Noland believe Willow was given to them so they could help boost research in the area of 22-week preemies and to help others have a chance to survive and thrive.

Willow is now 20 months old and has graduated from physical therapy. Her pediatrician has no concerns about disabilities or delays. A gastrointestinal tube rarely is used any more. Her favorite food is Cheetos. She still uses oxygen at night as her lungs continue to grow and develop.

Last week, she darted across the couple's wide front lawn on a sunny fall day, chattering away. Her mom calls her feisty and strong-willed and stubborn.

"It took her a few months of catching up, and then spring hit and she just started crawling and walking, and she took off," Mrs. Noland said. "She's pretty crazy now. She is nonstop on the go."

In a few months, perhaps, the only remnant of Willow's ordeal will be her surgery scars.

"I used to hate the scars ... because they just reminded me of all the sad nights and the hard nights of waiting in the OR room and waiting outside her room to see if she's going to survive," Mrs. Noland said. "But now, I look at them and I'm like, 'This is just proof of what you can overcome, what you can take.'"