COLUMBUS, Ohio--Today, Governor Mike DeWine signed the Human Rights and Heartbeat Protection Act (SB 23) into law. The Ohio Senate passed the legislation on March 13, and the Ohio House passed the legislation yesterday. Governor Mike DeWine has long stated that he would sign it should it reach his desk. This is the first pro-life law Governor DeWine has signed since he took office. 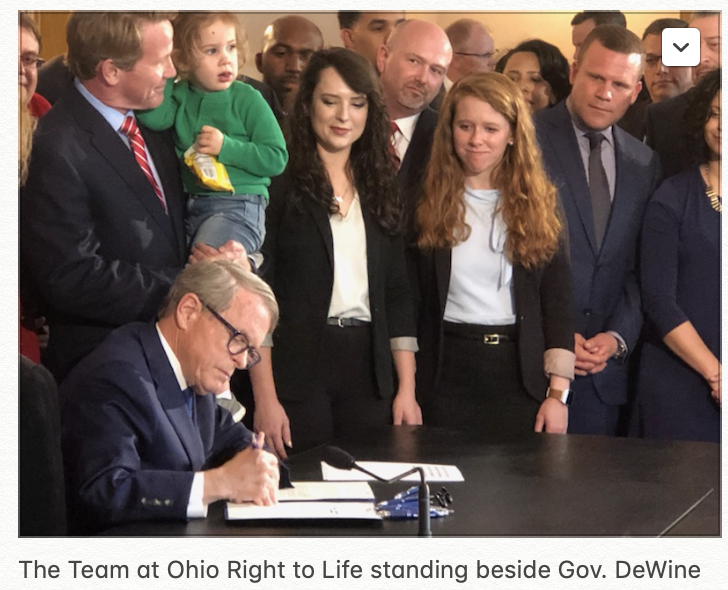 “Pro-life Ohio thanks Governor DeWine for taking a courageous stand on behalf of unborn children with beating hearts,” said Mike Gonidakis, president of Ohio Right to Life. “Governor DeWine continually stated throughout his campaign that he would sign the Heartbeat Bill, and he made good on that promise today. Ohio Right to Life thanks our legislative and statewide pro-life leaders for prioritizing this important legislation."

The Heartbeat Bill, when it goes into effect, will prohibit abortion when a human heartbeat can be detected. An abdominal ultrasound can detect a heartbeat between eight and twelve weeks. A recent Marist Poll found that 80% of Americans want to limit abortions no later than three months of pregnancy (12 weeks), and another poll found that 56% of voters are in favor of Heartbeat Bills specifically.

"Governor DeWine continues to prove his commitment to the most vulnerable among us, including the unborn” said Stephanie Ranade Krider, vice president and executive director of Ohio Right to Life. “We look forward to working with him to further a culture of life in Ohio in the years to come."