The mission of Ohio Right to Life is to protect every innocent human life from conception until natural death--regardless of race, sex, or any chromosomal distinction. (Isn't it interesting how the other side tries to claim inclusion, diversity, and equality as their values?)

The fact that upwards of 90 percent of babies with Down syndrome are aborted is a sad reality that simply does not balance with our belief that all human lives have an equal and inherent dignity from our very outset.

While it's easy to believe that our world has progressed beyond the biased beliefs that people with Down syndrome cannot live happy and fulfilling lives, there are times when people slip back into that mentality--and sadly, there are also times when people outright promote that mentality. (Truthfully, I think this kind of negativity belongs to an ever-shrinking minority.)

But here's a heartening story out of France that is making waves across Facebook. Thank goodness for moms like Caroline who give all of us more courage and hope in taking a stand for all children everywhere.

In the four months since her baby girl Louise was born, Caroline Boudet has heard a lot of hurtful things. Louise has Down syndrome, and too often, Boudet found herself facing insensitive comments or questions. So the mom from Alencon, France, decided to let the world know in a Facebook post what not to say to parents of a child with Down syndrome.

"Words matter," she writes. "Here is my baby girl, Louise. She is 4 months old, has two legs and two arms, and one extra chromosome." 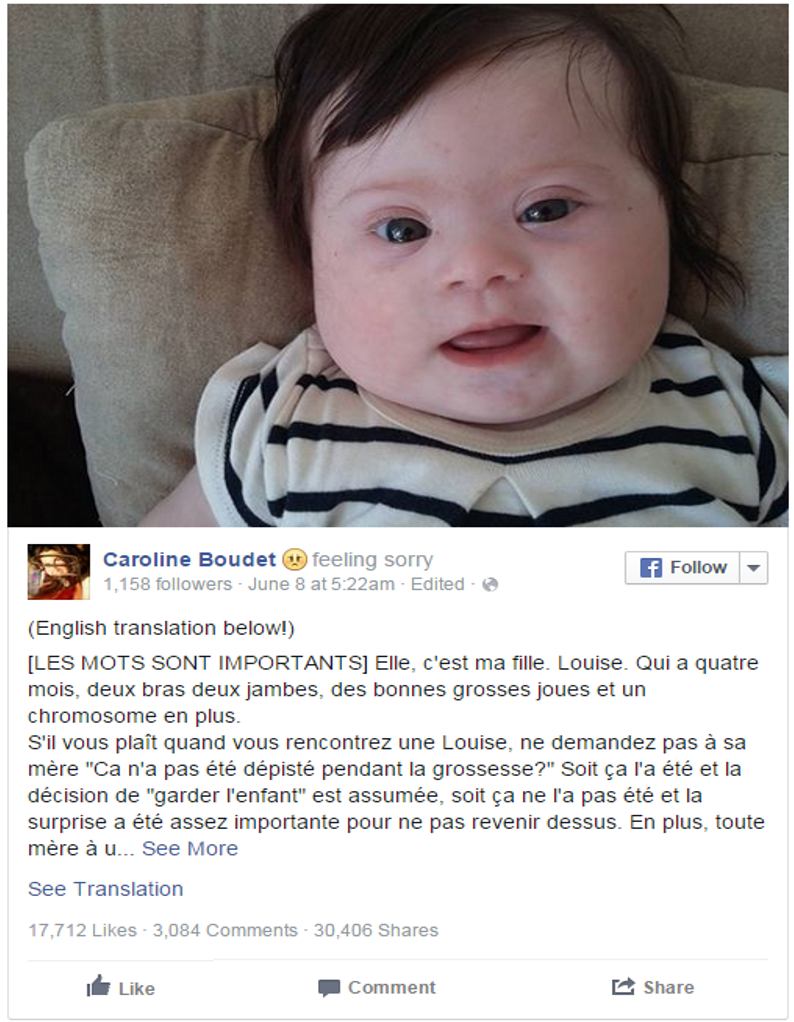 Here is my baby girl, Louise. She is 4 months old, has two legs two arms, and one extra chromosome. Please, when you meet a Louise, do not ask her mother, "How come you did not find out during the pregnancy?" Either they did, and the parents took the decision to keep the baby. Or they didn't, and it was surprising enough for them, to talk about it over and over now. Keep in your mind that mothers have a tendency to feel guilty about each and every thing, so a surprising extra chromosome... I let you guess.

Don't tell her mother, "It's your baby no matter what." No. It's my baby, period. Plus: "nomatterwhat" is quite an ugly name, I'd rather call her Louise.

Don't tell her mother, "As she is a Down's baby, she will... etc." No. She is a 4-months old baby who happens to have Down Syndrome. It's not what she IS, it's what she HAS. You wouldn't says "she's a cancer baby."

Don't say, "They're like this, they're like that." "They" all have their features, their character, their own tastes, their life. "They" are as different between them as you are from you neighbor. 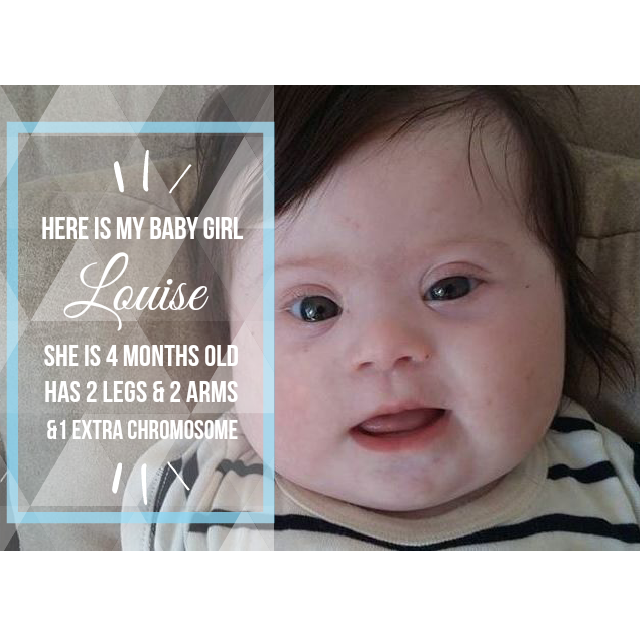 I know that if one does not experience it, one does not think about it but words do matter. They can comfort and they can hurt. So just give it a thought, especially if you're a doctor or nurse of any kind.

I usually do not make my status "public" on Facebook, but this one will be. You can read it and share it as you want. Because each year there are (in France) 500 new "mothers of Louise" that can have a day ruined by those kind of words. I know it's not meant to hurt. But you just need to know.

Boudet's post quickly went viral and got picked up by French newspapers and websites. She found herself overwhelmed by messages of support from friends and strangers alike. "This is a crazy day. I swear to you," she wrote the next day. "Dozens of messages by unknown persons who will reach me. I am... I do not know what to say. I am very touched."