Ohio Right to Life Presents An Evening with Dinesh D'Souza

COLUMBUS, Ohio—Today, Ohio Right to Life announced a fall event, An Evening with Dinesh D'Souza. D'Souza is a best-selling author and filmmaker, and the creator of the film Hillary's America: The Secret History of the Democratic Party. The event will take place on Thursday, October 20 at Grove City Church of the Nazarene at 7:00 pm, with doors opening at 5:30 pm.

"As a filmmaker, Dinesh has exposed practices that have dehumanized persons throughout American history, including slavery and the eugenic practices of abortion and forced sterilization," said Devin Scribner, executive director of Ohio Right to Life. "An Evening with Dinesh D'Souza will be devoted to lifting up the dignity of the human person through the values of truth, faith and life. We believe that such an event is critical before the General Election in November."

Born in Mumbai, India, Dinesh D’Souza came to the U.S. as an exchange student and graduated Phi Beta Kappa from Dartmouth College in 1983. A former policy analyst in the Reagan White House, D’Souza also served as John M. Olin Fellow at the American Enterprise Institute and the Robert and Karen Rishwain Fellow at the Hoover Institution at Stanford University. He served as the president of The King’s College in New York City from 2010 to 2012. His first book, Illiberal Education (1991), publicized the phenomenon of political correctness in America’s colleges and universities and became a New York Times bestseller for 15 weeks. In 2010, D’Souza wrote The Roots of Obama’s Rage, which was described as the most influential political book of the year, and set off a firestorm which ultimately led to D’Souza’s first film, 2016: Obama’s America. The film quickly rose to the 2nd highest grossing political documentary of all time.

“The thought of another 4 years of a pro-abortion presidency is scary--but we want our members to join with us in showing all of Ohio what it means to cherish the dignity and rights of the human person," said Scribner. "This is the only path that America can choose if we are to preserve and honor the best within us. Join us on October 20 to illuminate truth, faith and life."

Tickets to the event are $20 and can be purchased at this link. Limited VIP seating and tickets to a private reception with Mr. D'Souza before the event are also available. For pricing information and availability, please contact Devin Scribner at 614-547-0099 ext. 309 or by email at [email protected]. 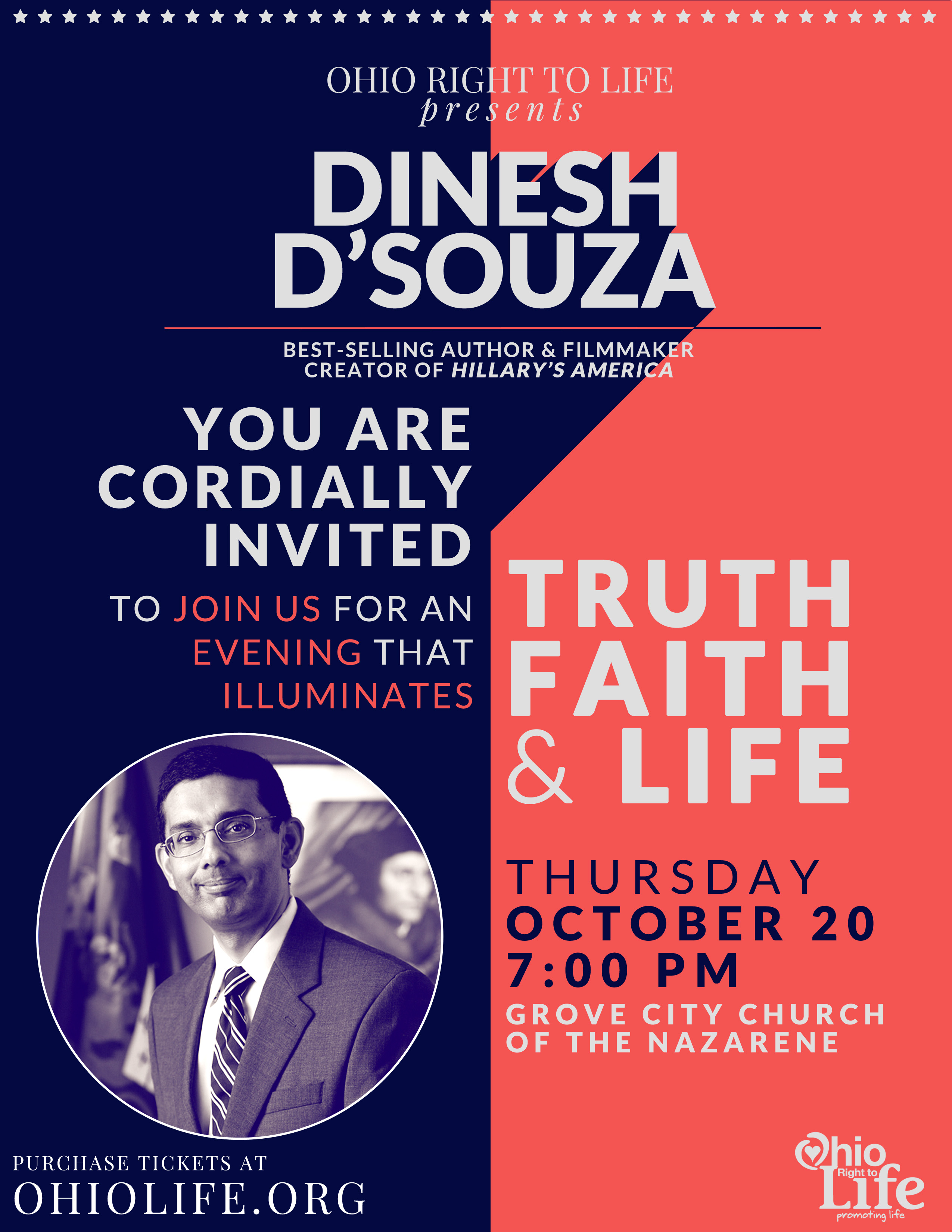