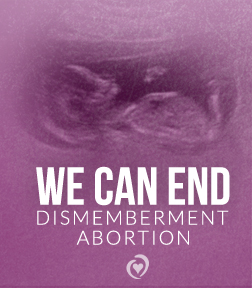 I sign this petition in support of Senate Bill 145 which protects unborn babies from dismemberment abortions, otherwise known as “dilation and evacuation.” It is time Ohio put an end to this inhumane practice that brutalizes the body of an unborn child.

Dilation and evacuation is a procedure in which the abortionist first dilates the woman’s cervix and then uses steel instruments to dismember and extract the baby from the uterus. The D&E abortion procedure is usually performed between thirteen and twenty-four weeks LMP. In 2015, the Ohio Department of Health reported nearly 3,000 D&E abortions in the state of Ohio.

Like partial-birth abortion, dismemberment abortion is a brutal procedure which literally rips the child limb from limb. In Gonzales v. Carhart, the Supreme Court said, "No one would dispute that, for many, D & E is a procedure itself laden with the power to devalue human life.”

I urge you to protect your most vulnerable constituents.