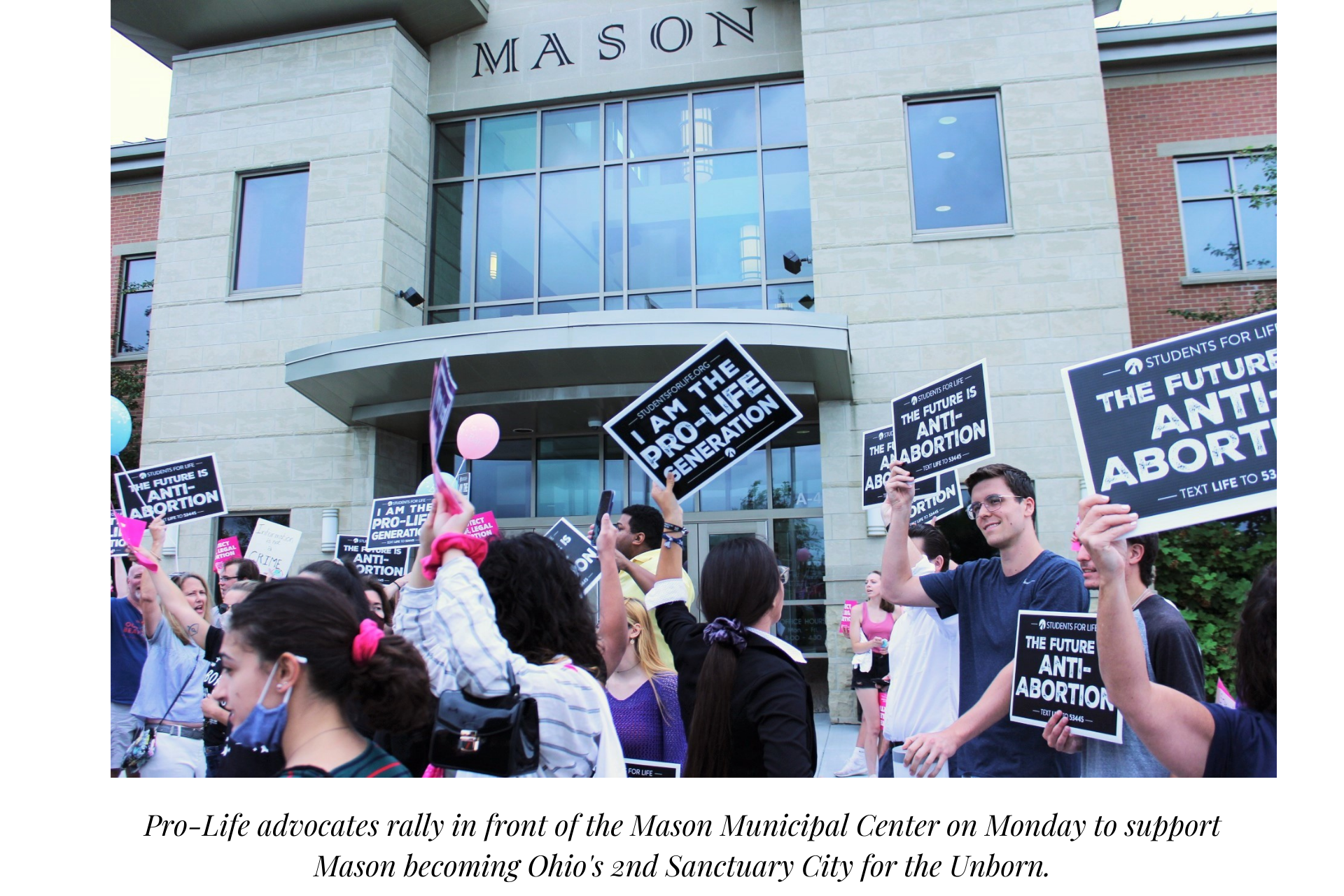 During the August 9th city council meeting, which lasted over 4 hours,  pro-abortion protestors continually disrupted the meeting, broke parliamentary procedure, and harangued the elected officials present, including the Mayor of Mason, Kathy Grossman. The situation escalated when Ohio Right to Life’s Communications Director, Allie Frazier, began to testify on behalf of the ordinance. Pro-abortion protestors erupted after Frazier asserted that “abortion victimizes women and...kills babies.” The protestors then proceeded to accuse Frazier of harassment and engage in an unhinged verbal confrontation with Mayor Grossman.

After calling a 5-minute recess, the city council was forced to adjourn the meeting early on the recommendation of local police due to safety concerns. The next Mason City Council meeting is expected to be held on August 23.

Regardless of what obstacles might be thrown in our way, the pro-life movement refuses to be bullied or intimidated into silence. We are passionate and principled people who aren’t afraid to stand up to the fury of the abortion industry in order to protect the innocent. Ohio is pro-life and we will end abortion.

To learn more about Sanctuary Cities for the Unborn, click here.

Late Tuesday night, the United States Senate successfully re-inserted the Hyde Amendment into the federal budget bill by a vote of 50-49. Hyde, a long-standing bipartisan protection, safeguards taxpayer money from being used to pay for most abortions. Thanks to the unwavering support of all 49 Republican Senators plus pro-life Democrat Joe Manchin, the Senate succeeded in adding Hyde back into the budget bill. Previously, the U.S. House had removed Hyde in their version of the budget. 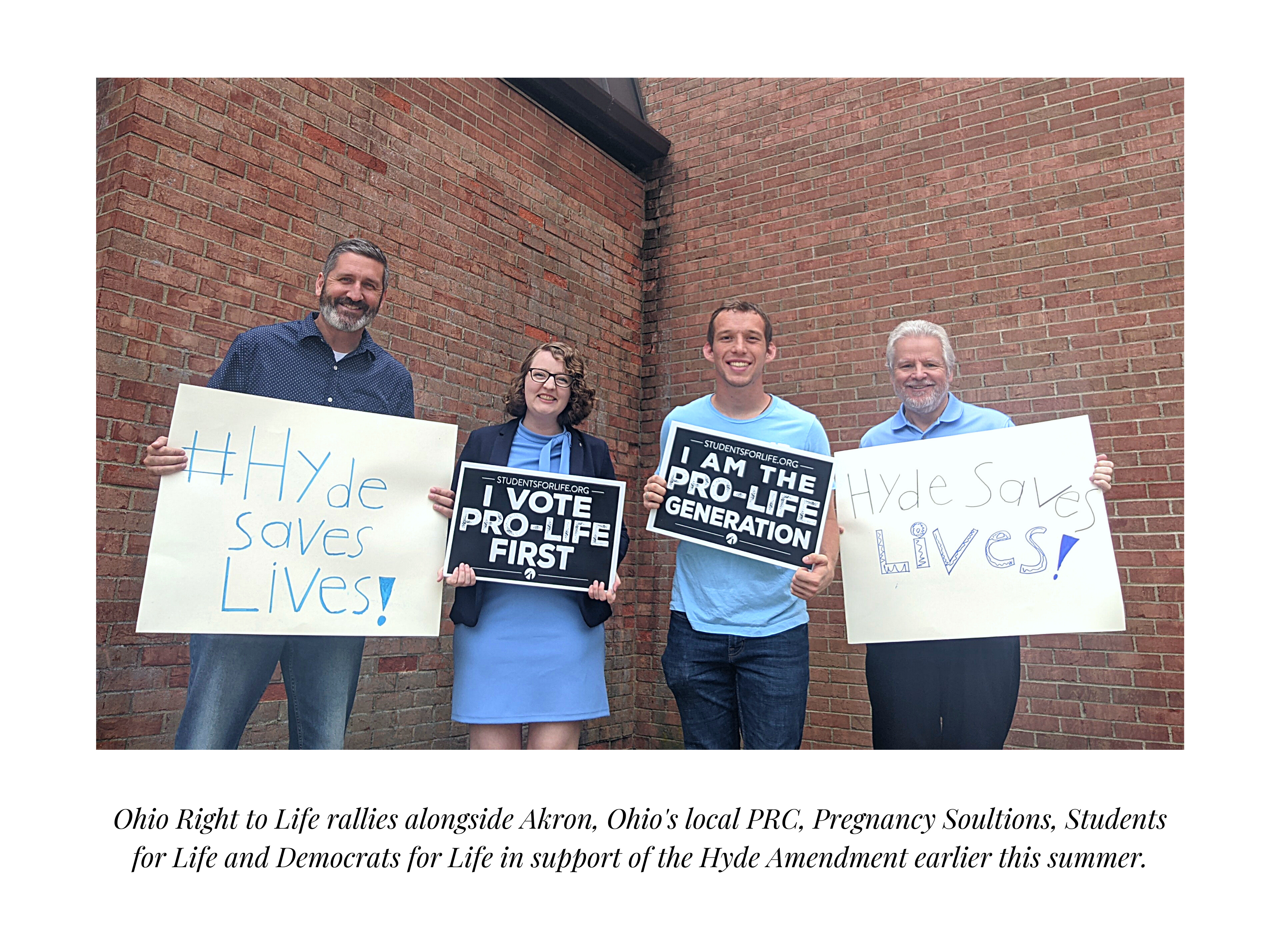 Concerningly, President Biden has vowed to ax the Hyde Amendment, going so far as having listed it on his post-election priorities during his 2020 presidential campaign. This is a strange move considering that a majority of Americans (58%) oppose taxpayer funding of abortion, including 1 in 3 Democrats.

It is imperative that our federal legislators hold the line and ensure that the Hyde Amendment remains in the final version of the budget. Since Hyde was first implemented in 1976, over 2.4 million lives have been saved and an estimated 1 in 9 low-income Americans are alive today because of Hyde’s ban on taxpayer funded abortion. Please pray that legislators on both sides of the aisle will reject abortion extremism and not force pro-life Americans to fund the ending of innocent human lives.

For more information about the Hyde Amendment, click here.

The worst fears of pro-life investigators have been effectively confirmed after recent analysis by doctors has indicated that scientists at the University of Pittsburgh have likely been harvesting organs from live abortion survivors for use in grisly science experiments. After recently revealed HHS documents outlined U Pitt’s procedures for tissue procurement, doctors confirmed that for usable organs to be harvested from babies after abortions, the babies would most likely need to be alive during the process.

This is due largely to the fact that the poison used to stop babies’ hearts during late term abortions renders human tissue unusable for experiments. Because of that, it seems that scientists at U Pitt have been forgoing injecting it into babies in utero to harvest fresh body parts for their experiments. Statistically, skipping the digoxin-injection step of the abortion process leads to up to 50% of babies being born alive.

Over the last 5 years, the federal government has given U Pitt nearly $3 million dollars to become a main point of procuration and distribution for fetal tissue for scientific research. In U Pitt’s funding ask to HHS in 2015, they bragged about harvesting organs from 5 babies weekly, with the hopes of using federal dollars to ramp that number up to 725 annually.

The dehumanization of children through abortion—reducing them to bloody pieces to be experimented on or trash to be thrown away—has turned our society into a horror show. For such brutal actions against defenseless children to be not only allowed, but to be sanctioned by the federal government is truly egregious. We have a moral obligation to end abortion and ensure justice is served against the abortion industry and their allies for these crimes against humanity. If we do not, children will continue to be brutally murdered and pieced out for parts.

To read an article from Life News with additional information, click here.

Get Your Church Involved in Ohio’s Pro-LIFE Movement! 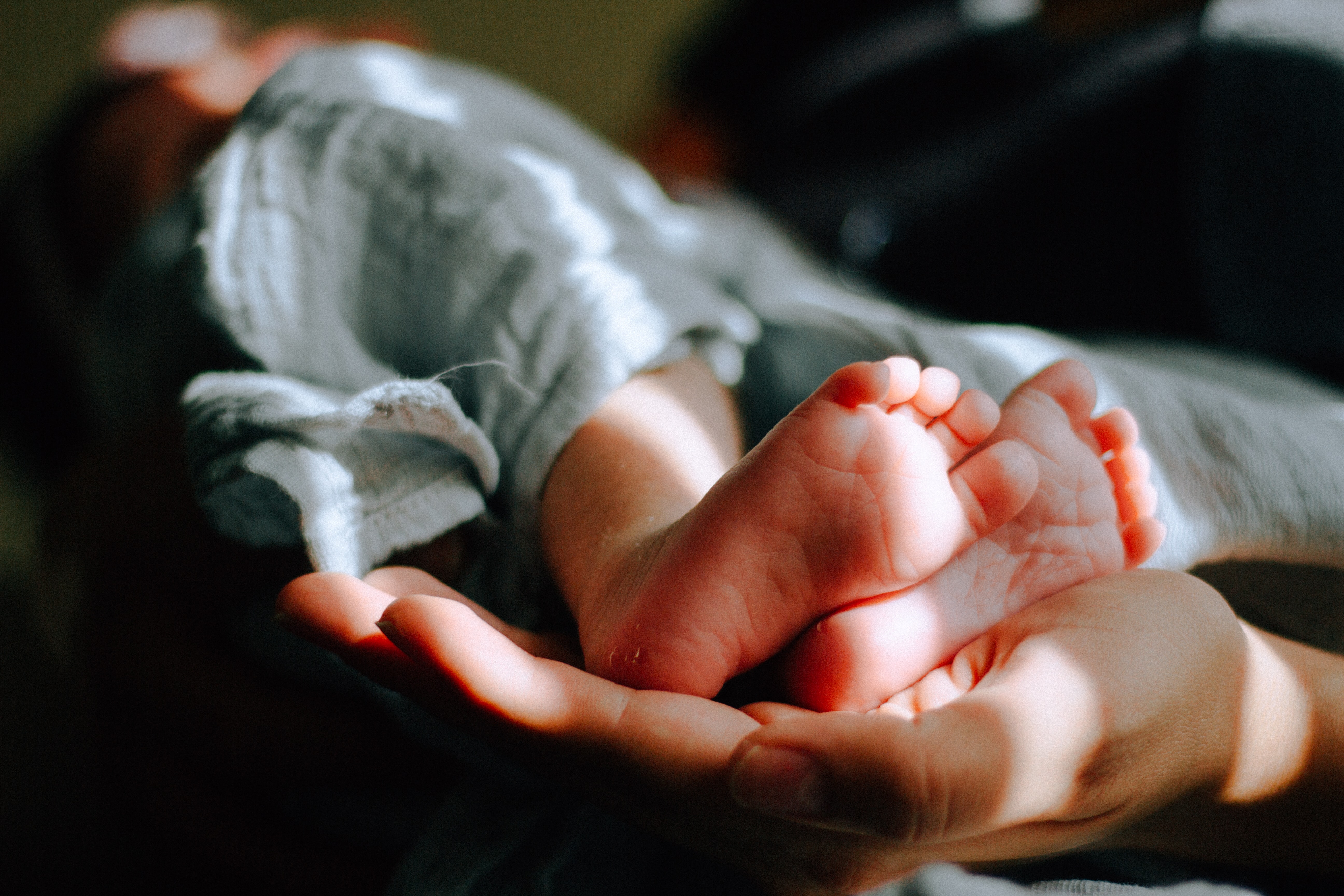 Are you passionate about protecting the least of these? Ready to see what God might do at your church to support moms in need and save babies?

Get your church the tools you need to be a voice for the voiceless by joining Ohio Right to Life’s grassroots network!

We have speakers and resources for your church to speak out on the pro-life issue in a compassion-focused and service-oriented manner. We’d love to meet with your team and chat about how your church family feels lead to be involved in Ohio’s vibrant Pro-LIFE movement!

To get connected and to learn more, reach out to Mary Parker at [email protected]

“He has showed you, O man, what is good. And what does the LORD require of you? To act justly and to love mercy and to walk humbly with your God.”